“What does the fox say?” asked a comedic one hit wonder a few years ago. The question is however not what but where does it say it. Did you know that in a different part of the world animals say a completely different thing? Wait, but does that mean that animals are multilingual? What? Really? Well, unfortunately not. But humans on the other hand are. Onomatopoeia (a word that phonetically imitates the sound that it describes) vary as languages that we use differ. 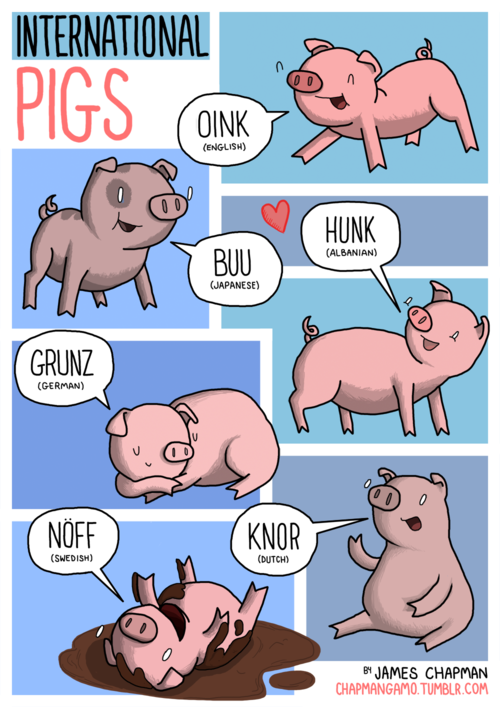 There is no ‘universal’ sound for an animal. If you ask a 5-year-old in Poland to imitate the dog, you would hear “hau, hau” in response, but a child in Spain will say “guau, guau”. In Japan dogs do “wan, wan”, “blaf, blaf” in the Netherlands, “hev, hev” in Turkey and “woof, woof” in Britain. What about our precious cats? If you want to sound like a cat in Sweden you need to say: “mjau!”, in Vietnam “meo!” and in Britain “meow!”. Interestingly, Japanese is the only language that doesn’t start a cat’s noise with the letter “m” (“nyan, nyan”). Other pets, such as birds, in France do “cui-cui”, Greece “tsiou, tsiou” and in Japan “chun, chun”. Ok, so let’s go outside! A horse in Poland goes “I-ha-ha!”, “I-go-go” in Russia and “vrinsk” in the Netherlands. Next, a bee: “sum!” in Germany, “boong” in Korea and “bzzz” in Britain. A Chinese frog makes the sound “guo, gou”, a Thai “op, op”, a Hungarian “brekeke” and an Italian “cra, cra”.

Linguists argue that the difference is not only lingual but also cultural. “In English we have rather more sound words for dogs (woof, yap, bow wow, ruff, growl) than in any other language as English-speaking countries tend to have the highest dog ownership per capita. There are also clear differences when you look at how the same language is used across difference geographies and environments. In Australia, camels have been introduced in the outback and so we have ‘grumph’. Unsurprisingly I haven’t come across any sound for a camel in the US or UK. Similarly, in mainland Spain there is ‘clou, clou’ for a male turkey, but in Mexico they say ‘goro-goro-goro’,” says Professor Derek Abbott from the University of Adelaide (source: theguardian.com).

What seems to be the cutest onomatopoeia is a mouse’s – and wait for it, in almost all languages: “pip, pip” in Sweden, “cin, cin” in Hungary, “jjik” in Korea and “squitt” in Italy. And finally, if you want to sound like a duck in Poland use “kwa, kwa”, in Romania “mac”; “rap” in Denmark, “quack, quack” in Britain, “coin” in France and “prӓӓks” in Estonia.

It doesn’t matter where you are, the language of animals will differ slightly. Next time while learning a new one, dig a little deeper to find out some cute, new onomatopoeias. It will help you understand that particular culture better and at least will bring some fun to your dictionary!

‘Millennials’ and ‘centennials’ – who are they?