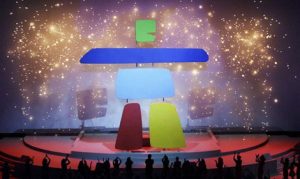 VANCOUVER CHOOSES INUIT LOGO FOR 2010 WINTER OLYMPICS: A stylized Inukshuk, official 2010 Winter Olympic emblem, is unveiled in Vancouver British Columbia 23 April, 2005. Organizers chose the traditional stone sculpture used as a directional landmark by the Inuit people as the Games' logo. The Inukshuk „has become a representation of hope, friendship and an external expression of the hospitality of a nation that warmly welcomes the people of the world with open arms,” organizers said. The distinctive formations are found across the country – from coastlines to mountaintops, from small towns to large cities – in a variety of styles. AFP PHOTO/HO/VANCOUVER ORGANIZING COMMITTEE